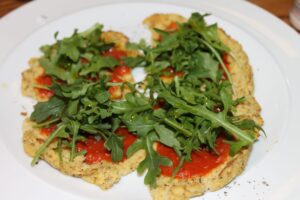 You may have heard about cauliflower pizza crust, as it is all the rage right now in the food world.  People can’t get enough of this veggie crust that passes for the “real” thing, is gluten free, and gives you an extra serving of vegetables.

I recently had a friend ask me if I could recommend any good “cauli-crust” recipes.  Could I?  I sure could.  And I thought since I was sharing, that I would share with all of you too.

*Note that they are all the basically the same ingredient list. Cauliflower, eggs, and cheese.

Here is the basic rundown from one of my favorite food bloggers, and a great way to acquaint yourself with the process:

Now that you know the process…

Below is the one I typically use because it does not require dairy (which is tough on my tummy). It also has no flour of any kind.  For this reason, it’s tough to get it to hold together enough to pick up like a pizza slice even if you flip it over to cook both sides.  However, it still tastes darn good with tomato sauce on it and eaten with a fork (what doesn’t?). If you want it to hold up better and a little stiffer, you’d do well to add cheese or some sort of flour.  I’ve included a few example of what I mean as you read on.

What I like about this next one is that you start with FROZEN CAULIFLOWER, which is great because it’s already been cooked, so you save the step of chopping and go right to “cooking”.  Also, the “cauli” will be easier to handle when it’s not hot.

As you might be starting to notice, once you have the basic idea of ratios, you can start to sub ingredients in and out. An example of that is below, where the blogger subbed Mozarella cheese for the traditional parmesan or the detoxinista’s goat cheese:

Now here are the VEGAN options, (no egg and no cheese).  Incidentally, they are also both gluten free.  The first uses almond meal to help it hold together along with the help of “eggs” made from chia seeds and water.  The second uses the same chia “egg”, but quinoa flour instead and adds nutritional yeast for a “cheesy” flavor without the cheese.  You could even try to combine the two recipes to make your own by swapping the flours or the spices.

And finally, this last one I’ve actually yet to try, but it looks yummy. It’s a play on the “pizza” and instead,  “cauli” breadsticks.

Good luck trying them out and before you begin: 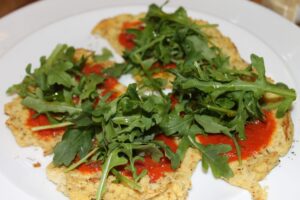 Otherwise, happy recipe testing and let me know how it goes, or if you have any questions for me. 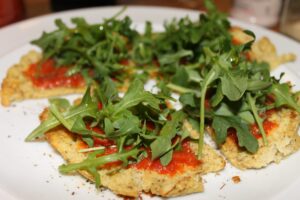 About the Author: Sherri